For nearly 20 years, Gary took his compassionate message to the classroom where more than 60,000 students heard him preach loud and clearly 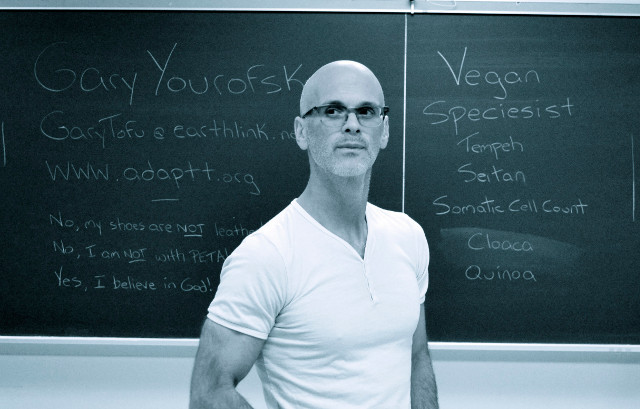 After 2,660 lectures to more than 60,000 people at 186 schools in 30 states and several Israeli cities and schools, there is no doubt that my presentations are the most powerful, informative and passionate speeches ever conducted about ethical veganism!  As of January 1, 2015, I am no longer doing live presentations. If you are an educator interested in discussing animal rights, please go to the Videos and Advertisements page or my YouTube channel and simply show one of my SIX speeches during class, or assign one or all of them as homework. The speeches range in length from 18 minutes (2007 at Wayne State University), 38 minutes (2006 at Deerfield Academy), 41 minutes (2005 with activist Kate Timko), 45 minutes (2014 at Oakland Community College), and 48 minutes (2014 at City College-NY) to the famous 70-minute presentation at Georgia Tech (2010). All six touch on different ethical angles for choosing veganism.

From 1997-2014, I gave private classroom presentations in the following schools:

“Damn you Yourofsky! I knew it when you said it. ‘What is your logical argument for causing pain in return for taste?’ As a philosopher, I knew I would have to grapple with it. For whatever reason, this time I heard it in a way I could hear it. I had nothing logical. Frankly, there isn't anything logical to support my concept of taste in exchange for the death of an animal. So Saturday I went Veg. Just said ‘fuck it.’ I have to say, I don't miss it. So, screw you, and thanks. Keep fighting the good fight.”

“You make a powerful impression on my students. The word they often use to describe you is ‘awesome.’ I agree. Although I discuss animal-rights issues at some length in my ethics classes, I think you might accomplish more in changing deeply entrenched attitudes in an hour than I accomplish during an entire semester. You do this, not just by confronting my students with the stark reality of their food choices, but by inspiring them—sometimes with humor but always with passion—to do the right thing. You are an asset to the animal liberation movement, and I am always grateful to have you speak to my classes. I hope you will be able to continue your important work in education-based activism for many years to come.”

“I just wanted to thank you again for a brilliantly delivered, mind-opening, inspiring presentation. I've been to many lectures and presentations in my career, but NONE was as moving, as thought-provoking as yours. FYI: I was unable to teach my 9:30 class today because my mind is still whirling. THANK YOU!!”

In April 2000, educator Jill-Anne Fowler—formerly of Bowling Green State in OH and Westminster College in MO—wrote:

“If the US wants to rid itself of violence, it needs to examine not only violence committed between people but also violence between species. The violence committed against animals eerily and frighteningly parallels descriptions of domestic abuse, police brutality and murder. Gary's talk and the discussion I held afterwards awoke my students to these realities. His ideas and philosophies are rarely heard in this society, and if they are, they are seen as extreme. As educators, we must question why this is so. Please consider having Gary in your classroom.”

If you want to read thousands of testimonials from professors and students, and others who’ve seen my speeches online, check out the Comments and Conversions section. Be warned, you could probably finish Tolstoy’s War and Peace, or The Bible, before reading the entire list of comments!