The notions that “Vegans are 98-pound weaklings,” and “Athletes need meat in order to compete,” are mindless prejudices and outright lies 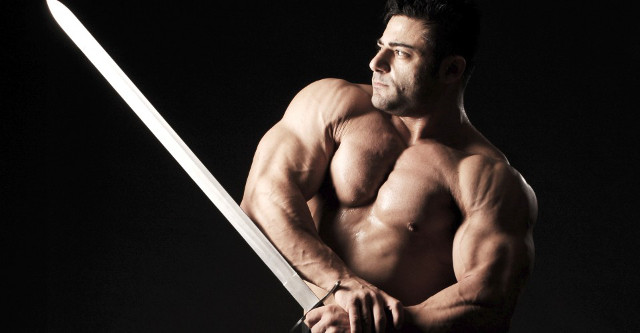 We've all heard the stereotypes about vegans being 98-pound weaklings and athletes needing meat, dairy and eggs in order to maintain their strength. Germany's Strongest Man titleholder Patrik Baboumian (pictured with sword above), former 300-pound NFL lineman David Carter (pictured with broccoli stalk to the right), Israeli powerlifter Avi Lehyani (who’s been vegan for more than 30 years; pictured with barbell below), and nine-time Olympic gold medalist Carl Lewis (pictured at the end of this webpage) prove the aforesaid claims are nothing but mindless prejudices and outright lies.

Many other noteworthy vegan athletes have proven that broccoli is mightier than meat, too. Here's just a partial list (click on any name for more information): 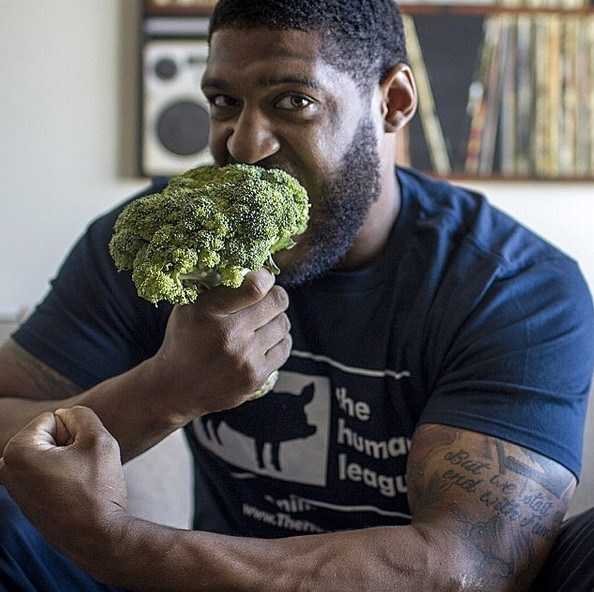 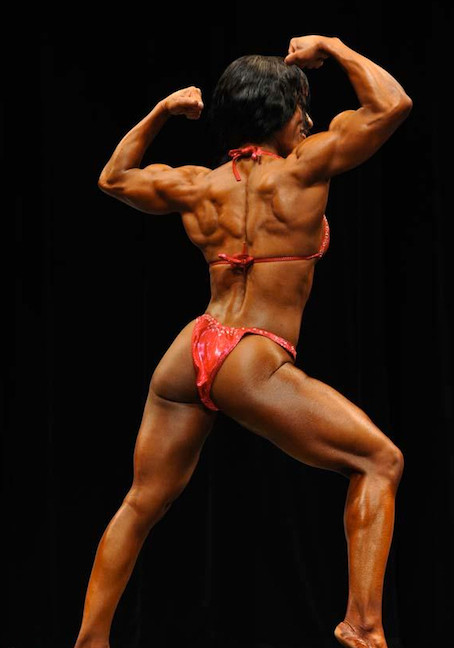 Be sure to check out the following websites, too: Vegan Bodybuilding, OrganicAthlete, Great Vegan Athletes, MeatFreeAthlete, and Vegan Fighter.

Carl Lewis On Being Vegan

The following is an excerpt from Carl Lewis' introduction to Very Vegetarian by Jannequin Bennett: 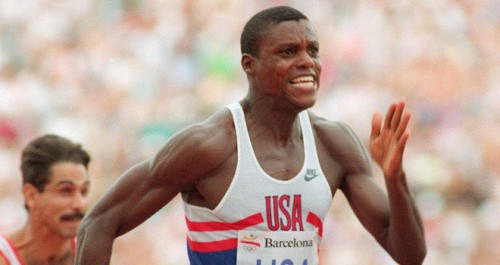 Can a world-class athlete get enough protein from a vegetarian diet to compete? I've found that a person does not need protein from meat to be a successful athlete. In fact, my best year of track competition was the first year I ate a vegan diet. Moreover, by continuing to eat a vegan diet, my weight is under control, I like the way I look. (I know that sounds vain, but all of us want to like the way we look.) I enjoy eating more, and I feel great. Here's my story.

When I grew up in New Jersey, I always enjoyed eating vegetables and was influenced by my mother, who believed in the importance of a healthy diet even though we ate meat regularly because my father wanted it. At the University of Houston I ate meat and tried to control my weight the wrong way—by skipping meals. Frequently I would skip breakfast, eat a light lunch, and then have my fill at dinner—just before I went to bed. Not only is skipping meals the wrong way to diet, but the way I did it is the worst way because your body needs four hours to digest its food before you go to sleep.

In May of 1990 I decided to change the way I ate when I realized that controlling my weight by skipping meals was not good for me. Within the space of a few weeks, I met two men who changed my way of thinking and eating. The first was Jay Cordich, the Juice Man, whom I met at the Houston radio station where I worked in the early morning. He was there to talk about his juicer, which makes fresh juice from fruits and vegetables. He said that drinking at least sixteen ounces of freshly squeezed juice each day will increase a person's energy, strengthen the immune system, and reduce the risk of disease. A few weeks later while doing publicity for a meet in Minneapolis, I met Dr. John McDougall, a medical doctor who teaches about the link between good nutrition and good health and was promoting his latest book. Dr. McDougall challenged me to make a commitment to eating a vegetarian diet and then to just do it. 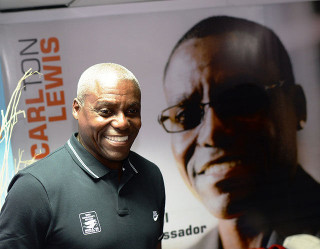 I remember vividly making the decision in July of 1990 to become a vegan. I was competing in Europe and ate a meal of Spanish sausage on a Saturday and on the following Monday started eating vegan. The hardest thing for me was changing my eating habits from skipping meals to eating throughout the day—which is much healthier. I also missed salt and so substituted lemon juice for flavor.

In the spring of 1991—eight months after beginning to eat vegan—I was feeling listless and thought I might need to add protein from meat to my diet. Dr. McDougall, however, explained that my listlessness was due to my needing more calories because I was training so many hours each day, not because I needed more animal-based protein. When I increased my calorie intake, I regained my energy. I was drinking 24 to 32 ounces of juice a day. I ate no dairy products. And I had my best year as an athlete ever!

You have total control over what you put in your body. No one can force you to eat what you don't want to eat. I know that many people think that eating a vegetarian diet—and especially a vegan diet—will require sacrifice and denial. [However,] eating vegan does not have to be tasteless and boring. As Jannequin Bennett says, "vegan eating is a truly indulgent way of life, as vegans regularly partake of the very best foods that nature has to offer."