Many animals are forced to undergo tasks that ought to be performed by paid human caretakers; the result is animal slavery 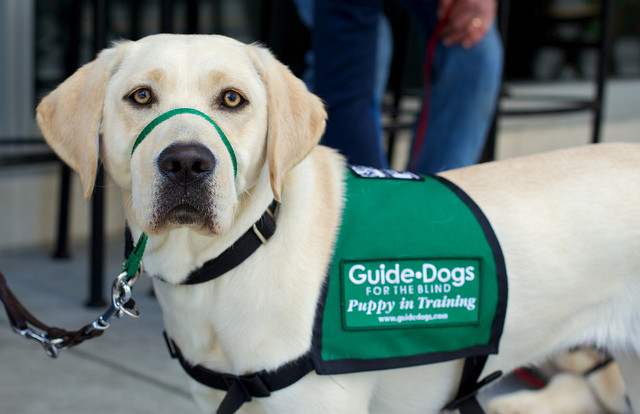 AUTHOR'S NOTE: Although other portions of this website are not copyrighted, this essay IS protected by copyright. No one may reproduce any portion of this essay without this author's written permission; please contact the author to request permission, or if you need clarification of these terms of use. If you are granted permission to quote, paraphrase, or cite this essay, please include a proper citation as appropriate, whether in a footnote and/or bibliographic reference for non-digital media, or similar citation on the face of the webpage for digital media. (Also, please roll your cursor over the image above for proper attribution and license for its use.) Thanks.

Animals were not put on this earth to be slaves for handicapped people. Dogs, monkeys, horses and ponies were not created to walk blind people to the local store, or fetch the remote control for paraplegics. Likewise, dogs did not evolve for the express purposes of sniffing out drugs, bombs, land mines, and dead or live bodies, nor did they evolve to intimidate suspected criminals and otherwise make life easier for human police officers. So-called “helper animals” are subjected to a form of involuntary and indentured servitude. Why? Because absent the costs of feeding, housing, and otherwise caring for them, these animals are not compensated for their labors. In a saner world, handicapped people would hire humans to perform this sort of work, and compensate them accordingly. There are plenty of people who need jobs, and plenty of people available for this type of work, including those with special caretaker skills. Using dogs, horses, ponies or monkeys is simply a way to obtain this assistance free of charge.

Let's deal with each of these myths in turn. First of all, animals no more “want” to perform so-called “helper” tasks than they could be witnessed performing them in their natural states! These animals are denied their inherent right to exhibit natural behaviors. All training sessions break the animals' natural instincts. While “breaking” a dog can be done without physical violence, it is unquestionably harmful psychologically. When it comes to monkeys, horses and ponies, the “breaking” is both physically and psychologically harmful.

Second, having shelter and being fed doesn't improve the lot of these animals, or otherwise justify their servitude. Human slaves were, and are, fed and housed also. Apart from performing backbreaking labor, these slaves experience lives of profound boredom that cuts across their instincts to cultivate their highest human inclinations and talents. Likewise, circuses, vivisection torture chambers, zoos and marine parks feed and house animals. There is no question that these animals' lives are also marked by profound boredom that undermines their instincts to roam, to forage and hunt, to socialize with other animals, and so on—that is, when they're not being tortured, or beaten, abused, and made to perform ridiculous “tricks” to amuse and entertain humans. Rational individuals rightly condemn the animal entertainment and vivisection industries because they are based on imprisonment, oppression and cruelty. It remains for these individuals to show how the keeping of “helper” animals is materially different—not merely as a matter of degree, but also as a matter of kind.

Third, as much as handicapped persons might “love” the companion animals who care for them, this misguided love does not in any way negate the fact that these animals are employed as slaves. In ancient Greece it was fairly common for slaveholders to maintain convivial relations with, and express a certain affection for, the slaves employed in their households. If such conviviality and affection sufficed to morally justify their servitude, we'd probably see slaveholding practiced in modern Greece! (Similarly for slaveholding in pre-abolitionist America, albeit to a far lesser extent since black African slaves were more routinely demeaned and treated as if they were “animals.”)

Finally, the argument that animals cannot grasp what it means to be adequately compensated appears to be a formidable objection on its face. Nevertheless, this line of thinking, so often invoked in philosophical circles especially, can be overturned quite easily. Imagine a small child of about three or four being forced to labor without compensation—or, more appropriately still, imagine a severely retarded adult coerced without compensation into heavy labor, such as hauling rocks around in a quarry (more appropriate because, unlike the child, it's presumed the retarded adult will never grasp the concept of just compensation). Reasonable people would agree that in this circumstance the retarded individual has indeed been enslaved, and further, to exploit him in this fashion is obviously immoral notwithstanding his inability to comprehend just how dire is his own moral predicament. (Many would go as far as to say—rightly, in my view—that it's precisely because the retarded man doesn't understand the harm being done to him that his exploitation is so particularly heinous.) Yet these very same reasonable people fail to note the exactly comparable situation with respect to “helper” animals—in fact, any animal that has been enslaved for any reason. Their unreflective biases in favor of the retarded human, and against “helper” animals, constitute speciesism, pure and simple.

In a November 23, 2008 article published in the Boston Globe online, it has come to light that members of an African species of giant pouched rat have been trained in Belgium, and deployed in various parts of Africa, to sniff out buried land mines that remain deadly even after many decades. The rats' extraordinary sense of smell has also been harnessed to inspect saliva samples of people thought to be infected with tuberculosis. Unlike humans and dogs, the rats' bodies are so light that they cannot detonate the explosives that they detect, so the rats are unharmed on that account. What's more, their astounding olfactory capabilities render them able to detect TB infection in saliva samples where the disease was completely missed through microscopic analysis. The rats apparently accomplish this task many times faster than human diagnosticians can, and at a fraction of the cost.

These trained rats pose an interesting and difficult case because (1) it appears that they suffer little or no harm, even during the training period, which lasts eight to ten months. The rats live a life of relative ease and comfort on a par with seeing-eye dogs, for instance—certainly a better, more fulfilled life than that of the typical rat to be found in a cage in a vivisection lab; and (2) there is no question that they accomplish a world of good. (Even the most hardened animal rights theorists must acknowledge this datum of the discussion.)

It is highly tempting, therefore, to view their case as a justifiable exception to the rule prohibiting use of animals for human purposes. Certainly animal activists of a utilitarian or welfarist stripe might see it that way. According to their lights, whatever minor inconvenience the rats will endure in the course of their deployment must be measured against the considerable benefits accruing from that deployment. If use of the rats in this fashion produces the greatest balance of benefits versus burdens for the greatest number of individuals, both human and animal, then according to that calculus their use must count as justified on moral grounds.

Consistently with all else said herein, this essay maintains the view that the rats are nevertheless exploited as slaves. It must be noted that the rats would not naturally be inclined to sort out the smells of TB infection and explosives except through an intensive training period lasting many months. Secondly, these rats must of necessity be confined to some type of enclosure, no matter how large. A cage is a cage is a cage, and the use of cages violates an inalienable right of all animals, rats included: their natural right to liberty. What seems like a radical proposition on its face is really cut of the same cloth as the proposition that not even one rat should be vivisected in a laboratory even if, contrary to fact, that vivisection demonstrably saves the lives of thousands of humans and animals. In either case, no amount of utility—that is, no amount of good consequences arising from the use of rats—can trump the fact that a violation of their fundamental rights has taken place.

As much as Gary Yourofsky and I empathize with disabled people, we don't think they're so special that their animal companions should be enslaved for their benefit. We understand fully the tragic implications of being blind, or being confined to a wheelchair; we understand that no one would ask to be born with severe disability, or fall victim to a terrible disabling accident or illness in the course of their lives. But all the sorrows of disability quickly succumb to selfishness once handicapped people think the whole world should grind to a halt just for them. Accordingly, the notion that handicapped persons want to secure some measure of “independence from other humans” simply will not do in this situation. Granted, it isn't ideal to have a person hanging around you all the time. But when we take the larger moral picture into consideration, we see that this is just one more setback that a handicapped person will have to deal with.

Gordon Brown is a former Adjunct Professor of Philosophy at Grossmont and Cuyamaca Colleges near San Diego, California, and an animal rights advocate. He is also ADAPTT's web developer.

Select an article below by clicking on its image, or click the Read more link. (You can also access any article in this series by clicking the upward-pointing arrow just above; from the main menu at top left of the page, click Other Animal Rights Issues, and go from there. Or simply read all the articles in order by using the left- and right-pointing arrows above.)