You can enjoy delicious milks, cheeses, yogurts and ice creams without making cows and their babies pay the price

Coconut Herb with black pepper, Tomato Cayenne with spicy peppers, and Creamy Original CHAO cheese slices by the Field Roast Grain Meat Co. They are all seasoned with fermented soybean curd from Asia that the Vietnamese call Chao, and they are absolutely delicious.

The Aged Cheddar Puffs from Earth Balance is without a doubt the best snack in the world! The cheddar is made with navy beans. If I don't eat the entire bag in one sitting, it's a miracle! Earth Balance is an all-vegan company with many other great products such as mac & cheese, sour cream & onion potato chips, cheddar chips, cheesy crackers, soy-free mayo, butter, soy milk, nut butters, flavored popcorn and soy-free coconut spread.

Follow Your Heart has mouthwatering blocks and slices of American, Provolone, Garden Herb and Mozarella vegan cheeses. FYH also has sour cream, and Vegenaise (mock mayo), which just might be the greatest food product ever created! They also have Ranch, Bleu Cheese, Caesar and Balsamic Vinaigrette salad dressings. FYH also has a restaurant and grocery store in Canoga Hills, California. 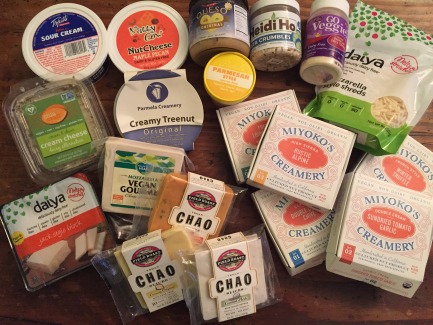 I saw Heidi Ho vegan cheese dips on the Shark Tank TV show and immediately went to Whole Foods and bought it! They have 5 flavors and they’re all fantastic.

Miyoko has created stellar vegan mozzarella, chive, sundried tomato garlic, aged English smoked and sharp farmhouse cheeses, and additional flavors, too! Plus, her block of European-style churned butter spread is to die for!

Anything by Kite Hill. Their cheesecake, cream cheese, cheeses and yogurts are stunning! You will NOT be disappointed!

Vanilla-flavored Living Harvest hemp milk. It's delicious in smoothies and cereal! This also comes in chocolate. Living Harvest's hemp has protein, riboflavin, B12, magnesium, phosphorous, zinc, calcium, iron, folic acid and all amino acids. Plus, each serving has 900 mg. of Omega 3 and 2800 mg. of Omega 6!

Milkadamia macadamia milk is the best-tasting vegan milk on the market!

So Delicious has delicious ice creams, ice cream sandwiches, milks, creamers and yogurt made from soy, almonds, cashews or coconuts. They're all UNBELIEVABLE!

Coconut Bliss has more than a dozen flavors of ice cream, and a few ice cream bars, too.

WholeSoy & Co. has more than 10 flavors of yogurt.

Nancy's has 7 flavors of soy yogurt.

Soyummi Foods has a great line of puddings available in chocolate, lime, cherry, rice and tapioca.