Ounce-for-ounce, there is more torture, carnage and cruelty in a glass of milk than in a steak

Here's a NEWSFLASH for vegetarians: There's more cruelty in a piece of cheese, a cup of yogurt or a glass of milk than meat! This video shows cows and calves being tortured with red-hot branding irons, and barbaric devices that mutilate their horns. The horrific abuse is standard operating procedure for the world's dairy industry. Many other vicious protocols are detailed below, and just above in the 6-minute video by activist Erin Janus. Additionally, activists Melanie Light and Ed Pope produced THE HERD, a brilliant 17-minute short film where human females replace cows as the victims of baby-theft, slavery, rape, commodification and murder! 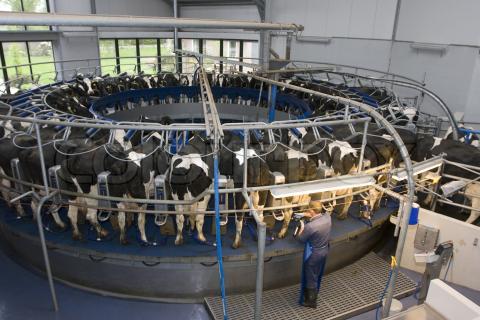 Since female mammals can only produce milk during and after pregnancy, all cows are raped once a year to impregnate them. Bigger dairy facilities immobilize the cows on what the industry calls a “rape rack” (pictured at right) where they shove a bare hand or long steel device into their vaginas to inject them with bull semen. Smaller operations individually lock the animals into a tiny “stall” to perform the rape. Around 9.5 months later, moments after giving birth, babies are stolen from their mothers. From a business standpoint, the dairy industry has to steal babies to prevent the calves from sucking up the milk they want to sell to the public.

Like male chicks on an egg farm, male calves are considered useless by-products of the dairy industry; males can't become pregnant or produce milk. Unlike the chicks who are thrown into rendering machines fully conscious, the calves are imprisoned by the veal industry in small stalls or tiny crates, sometimes with ropes and chains around their necks to immobilize them. Minimal to no movement is allowed; this prevents muscle development, which keeps THEIR flesh extra tender. The "imprisoned" video link also shows calves licking each other's faces to comfort each other, and desperately suckling into the air hoping to connect to their moms' udders. The veal industry only exists because of the dairy industry! If you avoid consuming the dismembered bodies of male babies but consume dairy, you are still responsible for massive amounts of pain and death because you are supporting the prolonged suffering of mother cows, and their female babies who wind up being raped and imprisoned like their moms!

After three to seven years, when cows no longer produce huge amounts of quality milk, they're sent to a slaughterhouse, chopped up into hundreds of pieces and sold for hamburger meat; 90 percent of it comes from the dairy industry. If given a chance, cows can live to be 18 to 25. The video at left shows a pregnant cow with an injured leg having her throat slit at a dairy facility in Turkey in 2009. Injured animals are costly so it is always easier to kill them than to treat their maladies. While the mother is bleeding to death, they also give her a fully conscious C-section so they can slice the still-breathing baby's throat too!

Machines are hooked up to the protruding udders of cows several times a day to suck them dry. Along with countless drugs and Bovine Growth Hormone injections, infections and pus form inside and outside of the udder. Then the pus is sucked out with the milk! Pasteurization, which cleans the pus but does not eliminate it, creates a concoction of sanitized pus. The national average hovers around 350 million pus cells per liter, which means that each glass of milk has around an eye-dropper full of pus! From time to time, The Hoard's Dairyman and other dairy industry trade journals discuss the pus problem. Cows raised on organic/antibiotic-free/hormone-free/grass-fed/local facilities don't produce pus-free milk either. In fact, organic milk has more pus than non-organic milk because when cows get infections, as they always do, medicines aren't used to treat the malady. Thus, more pus accumulates in the system. Soy, rice, almond, hemp, coconut, oat, flax and hazelnut milks (the vegan ones)—along with human breast milk—are the only pus-free milks.

Mother cows make milk for THEIR babies and for THEIR babies alone. They certainly don't make milk for baby humans, adolescents humans or adult humans. The human body has no need for cow milk, just as it has no need for dog milk, giraffe milk, zebra milk, camel milk, goat milk or rhinoceros milk. The only milk that anyone ever needs comes from THEIR own mothers' breasts! And when weaning is completed, milk is never needed again. Without a doubt, dairy is the stupidest and most unnatural 'food' consumed by humans. Have you ever turned on a wildlife program and watched a lion tackle an antelope—not to kill her, but to suck milk from her teats? It's high time for vegetarian hypocrites and selfish meat-eaters to wake up! If a mother cow is lactating, and her baby isn't present, then the mother and the baby are being tortured. No debate. No discussion. The jury is in, and this case is closed forever!

If you think calcium and protein build strong bones, why do Americans have astounding rates of osteoporosis and bone fractures, while the African Bantu, consumers of low-protein and low-calcium diets, rarely have bone issues? Along with tobacco, salt, caffeine—and a lack of exercise, magnesium and vitamin D—animal protein is to blame once again.

The Harvard University Nurses' Health Study proves that dairy products offer no protection from bone fractures or osteoporosis. In fact, participants who drank three or more servings of milk per day actually had a slightly higher rate of fractures than women who drank little or no milk.

More than 40 years ago, Dr. Aaron Watchman told The Lancet that the link between animal-based diets and osteoporosis was "INESCAPABLE." After reviewing several studies from Harvard and the U.S. Department of Health, his analysis appeared in The Lancet's May 4, 1968 article titled "Diet and Osteoporosis." With decades of medical studies still confirming the link between animal protein and osteoporosis, Watchman's conclusion remains infallible.

In fact, The British Medical Journal (BMJ) reconfirmed all of the aforesaid information in a study published in October 2014. The BMJ medical team followed 61,000 women for 20 years and 45,000 men for 11 years in Sweden, and showed that dairy provided no protection against bone fractures! Instead, those who consumed dairy had higher, deadlier rates of cardiovascular disease and cancers (there's more info about the dairy-cancer link in the following two paragraphs). 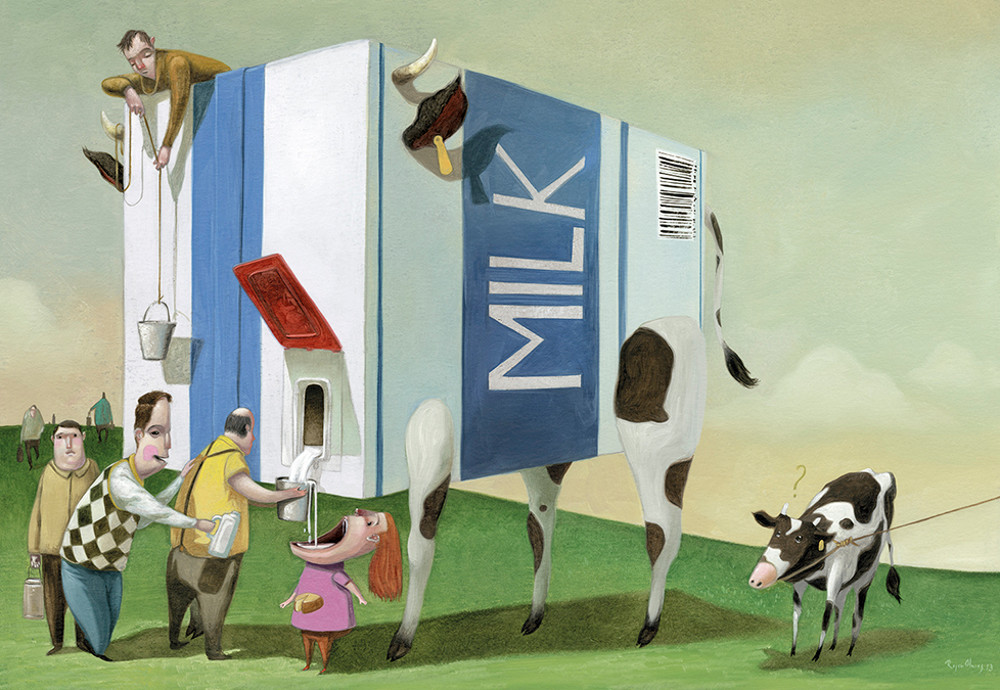 Without a doubt, sugar, the oil and fat in fried foods, artificial additives, human-made trans fatty acids found in junk food, and the excessive amount of refined carbohydrates found in white rice, white bread, and pasta cause health problems, while non-dietary factors harm us, too. Stress, a lack of sleep, smoking tobacco, chemical pollution, and a lack of exercise can wreak havoc on the body. However, since animal flesh and the things that come out of animals are always toxic, the main factors for disease development will always be animal protein, casein, the excessive amount of fat found in all animal products, and the 2-9 percent of naturally-occurring trans-fatty acids found in meat and dairy. Concerning cancer: Even though we're all born with cancer cells, the cells won't "activate" and turn deadly unless they are "expressed". So, preemptively amputating one's breasts (mastectomy), or taking some other drastic action, will NOT prevent cancer development if the cell "activators" are still present. Since cancer thrives in the acidic environment that animal protein creates, it is essential to eat plant-based foods exclusively, and control the non-dietary factors to the best of your ability. Check out this 2014 University of Southern California study which clearly indicts animal protein as a deadly toxin.

A 2013 Loma Linda University study confirms that vegans have the lowest cancer rates, while the American Journal of Clinical Nutrition (AJCN) proves that dairy increases the risk of prostate cancer. (A UCSF study of 27,000 men also showed an 81-percent increased risk of prostate cancer from consuming 2.5 eggs per week.) Another AJCN study shows that children who consume high levels of dairy products have close to three times the risk of developing colorectal cancer in adulthood, while a study of 60,000 women reveals that those who had four servings of dairy daily had twice the risk of ovarian cancer. The Lancet also reports that dairy, especially yogurt, will increase the risk of ovarian cancer. In 2004 the American Journal of Epidemiology published a study from the Yale School of Public Health which showed that animal protein and saturated fat increase the risk of non-Hodgkin's lymphoma, while large amounts of fiber (only found in plant foods) reduce the risk. In the documentary Forks Over Knives, Dr. John McDougall mocks the medical community for NOT recommending veganism as the best way to prevent, treat or cure cancer.

Dairy also contributes to many other health problems, from acne, asthma and allergies (meat is also an allergen) to Crohn's disease, ear infections and diabetes, just to name a few.

Florida researcher Robert Cade, M.D., and his colleagues have identified caso-morphin, a natural form of morphine found only in cows' milk, as the probable cause of attention deficit disorder (ADD) and autism. They found Beta-caso-morphin-7 in high concentrations in the blood and urine of patients with either schizophrenia or autism. (Autism, 1999, 3) Eighty percent of protein in cows' milk is casein. It has been documented that casein breaks down in the stomach to produce the peptide caso-morphin, an opiate. Another researcher observed that caso-morphin aggravated the symptoms of autism. (Panksepp, J., Trends in Neuroscience, 1979, 2) A third scientist produced evidence of elevated levels of endorphin-like substances in the cerebro-spinal fluid of people with autism. (Gillberg, C., Aspects of Autism: Biological Research (London: Gaskell, 1988), pp. 31-37)

Other research papers that suggest a possible link between dairy consumption and the autism spectrum of disorders include the following:

(The linked thumbnail image showing a cow's udder severely infected with mastitis, and discharging blood-stained milk with an extremely high somatic cell count, is from the University of Pennsylvania Dept. of Veterinary Medicine.)